Sorry for bringing this up again.

I created a dummy-variable-trap tag yesterday. As I wrote, I was doubtful that synonymizing it to categorical-encoding is helpful. By now I am not doubtful any more: I believe it is not helpful. Unfortunately, the synonym has already been established.

Take a look at questions about the dummy variable trap. I have already retagged some of them dummy-variable-trap. Mouse over the tag at one of those questions. Picture a user who is hazy enough about the trap to ask a question here. Will the tag wiki excerpt for dummy-variable-trap (which now is the same as for the synonym categorical-encoding) be helpful for them? Here it is:

Representing categorical variables as sets of numerical variables. Necessary in many types of analysis for them to process categorical data. A common example is using a categorical predictor in regression/ANOVA via dummy coding, effect coding, Helmert coding, user-defined contrasts, etc.

I don't think this will help the user in any way. In particular, the links to questions that actually explained what the trap is, why it occurs, what the consequences are, and how to avoid it, which I included in the dummy-variable-trap tag wiki are of course now gone that it has been synonymized.

I propose de-synonymizing the two tags again. I can reconstruct the tag wiki and excerpt for dummy-variable-trap.

Maybe, but I'm not sure. Note that my answer / suggestion to make it a synonym was well upvoted (+8) with no downvotes or dissenting comments for nearly two weeks before I went ahead with making the synonym. You posted a dissenting comment yesterday, which now has 1 upvote, but it's not clear if it was before or after I made the synonym. I do think it was reasonable to interpret the situation as a consensus for making the synonym at the time. Of course, that doesn't guarantee a synonym is the best choice and we can always delete the mapping with little difficulty.

If I imagine a user who wants to ask a question here about the dummy variable trap, and who has (at best) a hazy grasp of the idea, I don't picture them trying to learn about it by mousing over the categorical-encoding tag. Instead, I imagine them trying to ask a question. I figure they would have some title with "dummy variable trap" in it, and would also type that in the tags field. If someone were to do that under the status quo, they would see something like the following: 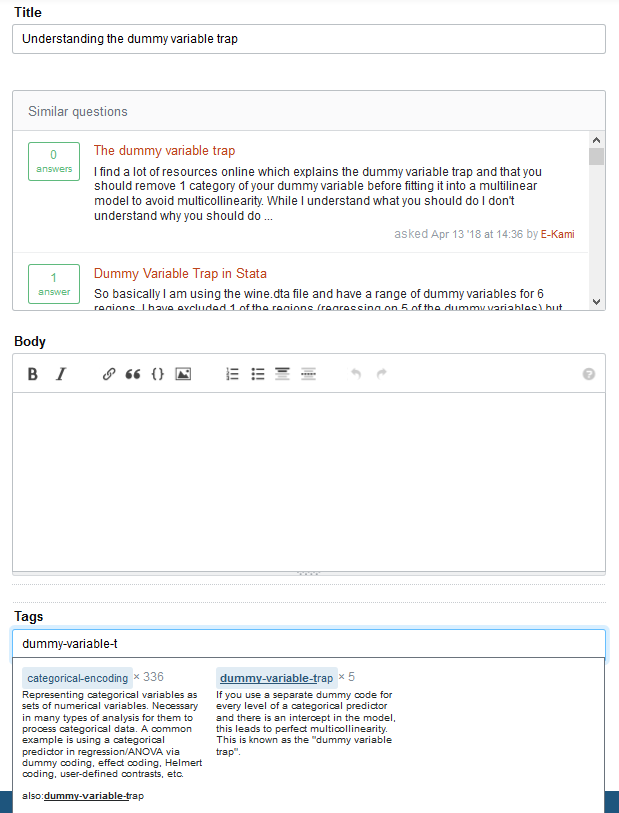 That is, the similar questions section would show links to some relevant, existing threads, and the tag suggestions would include [dummy-variable-trap], with it's appropriate excerpt. (After they select [dvt] and post the question, [dvt] would be silently replaced by [ce], but many people don't even notice that.)

Alternatively, I might imagine such a user searching on the terms "dummy variable trap". If I search on CV, I get this. That is, the synonym didn't impair the search. Searching Google is fine as well.

I think the issue is how the synonym affects searching on the tag (which I suspect primarily users more familiar with SE would do), and how having the mapping vs. not affects how well the information on the site is organized.

I'm open to arguments on that issue. In truth, I wasn't married to the idea of making the synonym beforehand. But I continue to lean towards having the synonym—call it 60-40 for.

8
Do we need a "dummy variable trap" tag?

8
Definition of [indicator-variables] tag?
10
Tags around categorical data coding / representation
6
Our tags for nominal, ordinal, and categorical data
6
Can I find excerpt/Wiki of a tag that is now a synonym of another tag?
5
Tags for zero-inflated vs. hurdle vs. point-mass-at-zero models
6
What to do about the [control] tag?
4
A new tag for mixture of data types
8
A ghost wiki excerpt after tag merge
9
How should we deal with the [normal-distribution] vs. [normality] tags?
6
Is this question about categorical features on-topic?