Should we remove the "datasets" close reason from the list?

Our recent proposal for adding one more close reason was declined. The reason was that we could re-use the "datasets" reason

Questions about obtaining specific datasets are off-topic on Cross Validated. You are welcome to post this question to the Open Data site instead, thank you!

This question appears to be off-topic because EITHER it is not about statistics, machine learning, data analysis, data mining, or data visualization, OR it focuses on programming, debugging, or performing routine operations within a statistical computing platform. If the latter, you could try the support links we maintain.

into two reasons while re-using the slot from "datasets" close reason?

What is our decision on this? I personally see no problem, but I'm curious about your opinions.

I like the idea of splitting. I don't know the exact history here, but it shouldn't determine the best set of reasons to use henceforth. The EITHER/OR structure of that reason has long seemed awkward to me: now it appears that it was a way to get round the limit on number of reasons allowed. What is important here, simply but fundamentally, is that reasons given are clear not just to those who vote for one, but also to the posters on the receiving end, often people new to CV or SE in general.

This question appears to be off-topic because it focuses on programming, debugging, or performing routine operations within a statistical computing platform. You could try the support links we maintain.

could be an example of a crisper, more focused reason to close often used here.

This question appears to be off-topic because it does not relate to the theory or practice of statistics, machine learning, data analysis, data mining, or data visualization.

could be an example of a crisper but catch-all reason to close (otherwise put, irrelevant to what we discuss here, while trying to avoid the circularity of saying this is irrelevant because it is irrelevant).

Asking for datasets may not now be very common, but we do see it done. That was a useful reason to close, but sacrificing that reason seems practical. But I suggest also adding nuance to https://stats.stackexchange.com/help/on-topic where we already say

We could give that a bit of a boost, say

Questions about obtaining particular datasets are off-topic. They usually are too specialized or raise programming or other computing issues of downloading and processing files better discussed elsewhere on Stack Exchange. The GIS site welcomes inquiries about obtaining geographically related datasets.

No, we shouldn't. If 'asking for datasets' close reason has been used, it has been useful (pretty much the same way as 'opinion-based' has, the second least used topic).

However, the idea of splitting the 'not about statistics' and 'pure programming is' good. Despite initially declined, we can try to insist with the SE staff to have a 4th close reason (as many other SE sites already have). Moreover, sooner or later that close reason will be broadened to include other types of shopping list questions here in CV SE (we can observe a shift in how users perceive such types of questions are in course; recent example).

Going either way (removing or not removing, splitting or not splitting), I also suggest we reorder the close reasons in the dialog from top to bottom according to their frequency of use (reported in Extract software-specific default close reason):

*I am assuming if split occurs, 'not about statistic' would rank 3rd (but this could be reassessed after some time with real data).

Here is the current dialog order: 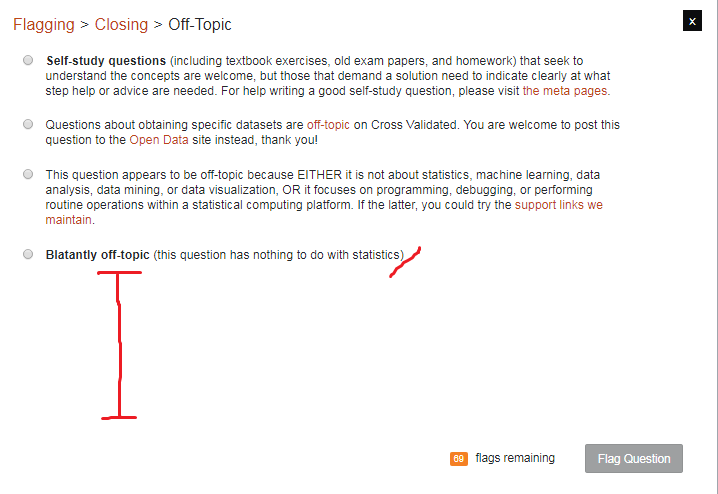 The picture also illustrates the dialog has space for adding more topics if we want to.

Not the answer you're looking for? Browse other questions tagged discussion on-topic closing-questions moderation user-interface .

10
Include 'asking for datasets' reason in the off-topic dialog
18
Shall we add "this is just a software question" to our default close reasons?
4
Migrating programming questions to StackOverflow
11
My question about visualization got on hold
15
Why do we have a tensorflow tag if questions about programming are off topic?
11
Extract software-specific default close reason
14
Question about math notation closed as off-topic
8
Can we ask questions related to deep learning/AI?
9
Should we retire the "data set request" closure reason?
10
Should we replace the "data set request" with distinct "this is an off-topic software question" and "this is not about statistics" closure reasons?