Do answers with equations and formulas in them get more votes?

I have this hypothesis. Ceteris paribus the answers that have formulas (equations) in them get more votes than plain English answers. Do you agree?

In short: I think that the bottom-line is that in terms of correlations, there is not a clear effect. It differs per user, and if we would scale the number of equations by the size of the post then actually the post scores become lower for more equations.

To see if there are causal effects one might still do some alternative experiments, but the experimental correlations below suggest that the patterns are small, with lot's of noise and confounding variables.

It is easy to gather the data:

But it is difficult to make something out of it.

If the number of equations in a post is high (counted by $$), then there is somewhat an increase of the scores of the posts. See the density function of the scores below. With four different selections, 0 equations, 1 equations, 2 equations, >2 equations. (Figure 1)

These correlations are a lot different from user to user. Maybe this may be a lead to think about causal relationships (although I suspect it is widely varying). 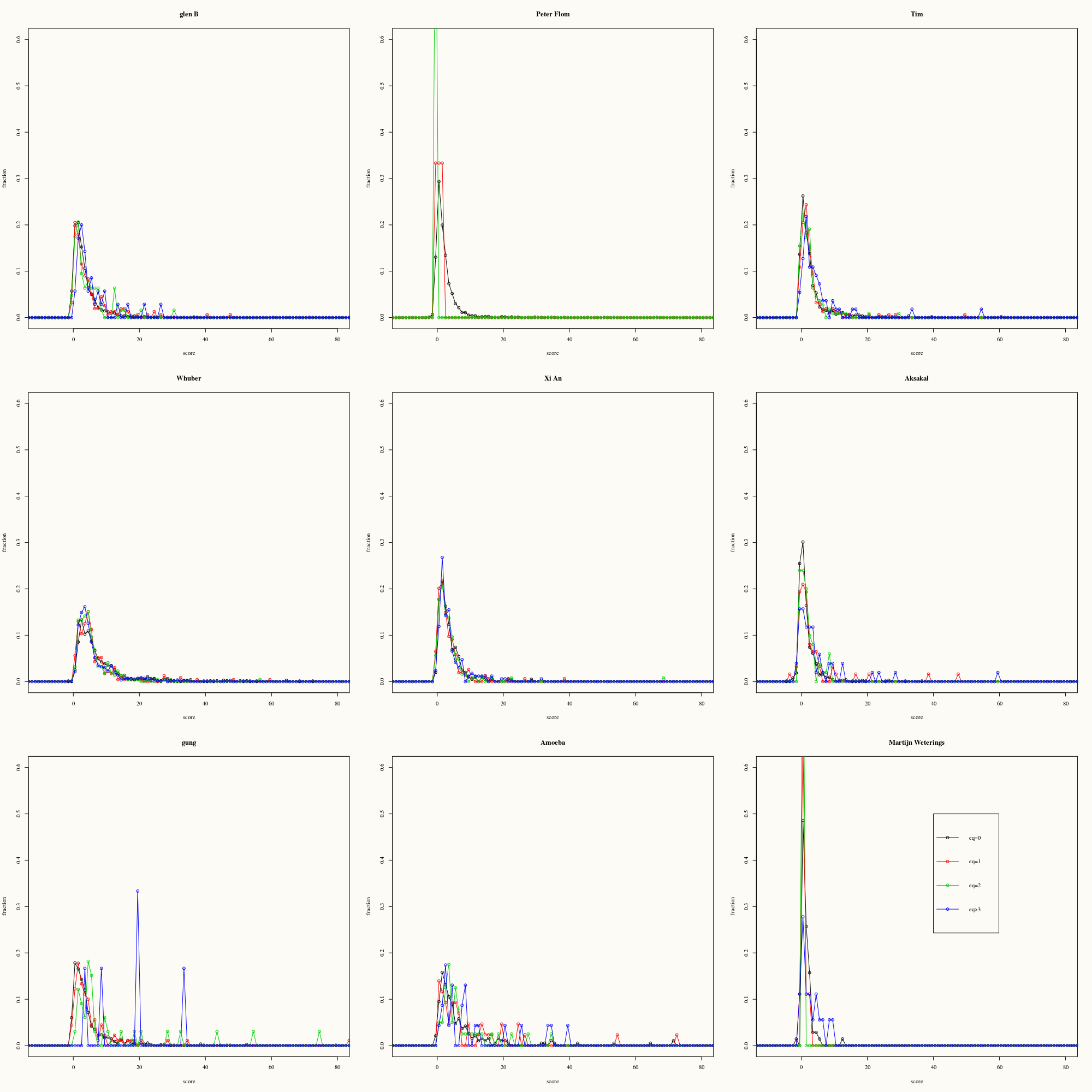 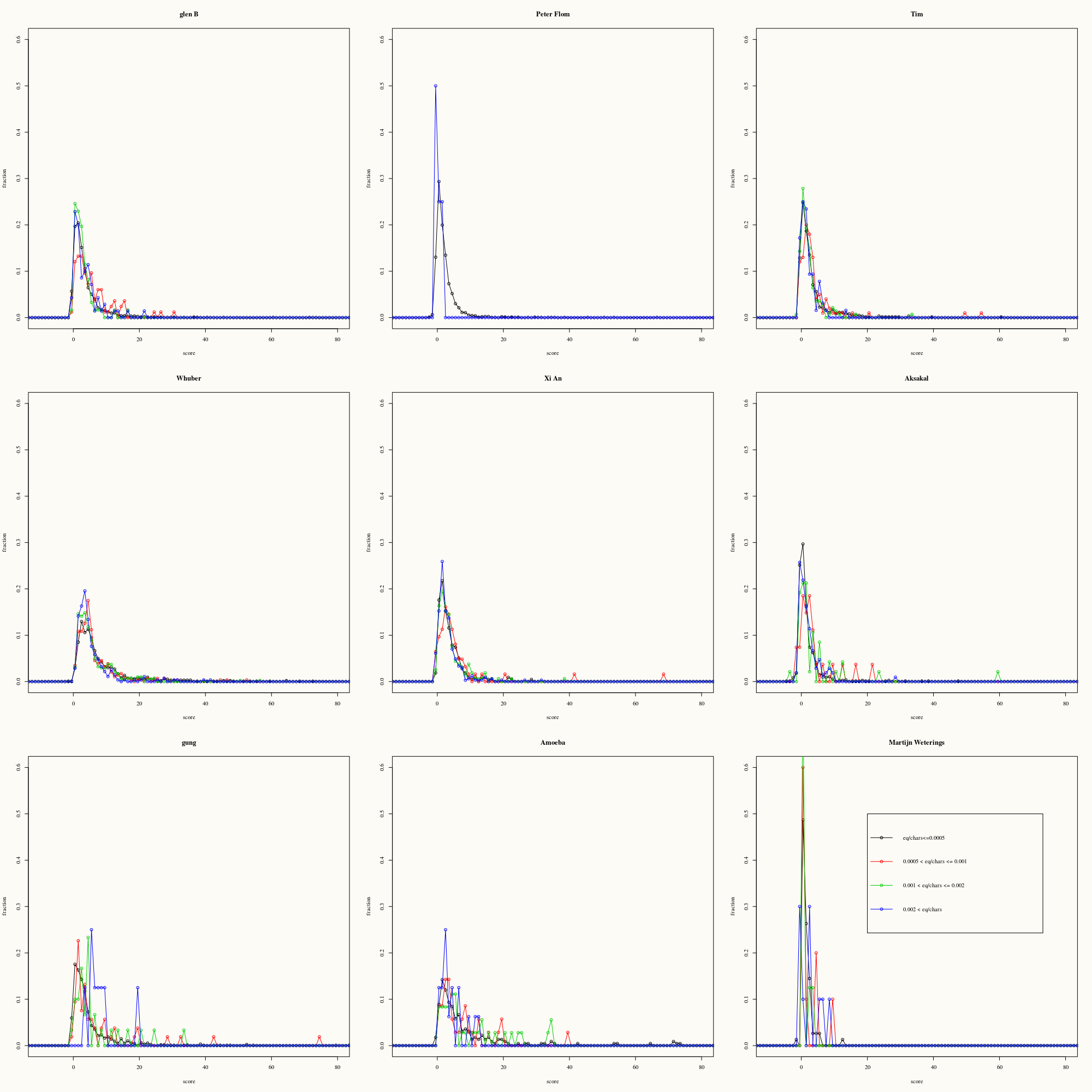 Because the above picture are small and noisy, I have created another, different view.

This time no split into 4 categories (making the numbers per category small, and instead a split into either functions with and without equations made by double $$). Also, the densities are not each by themselves scaled to 1 but instead are together scaled to 1. In this way also the relative difference can be seen how often a post has equations and how often not. 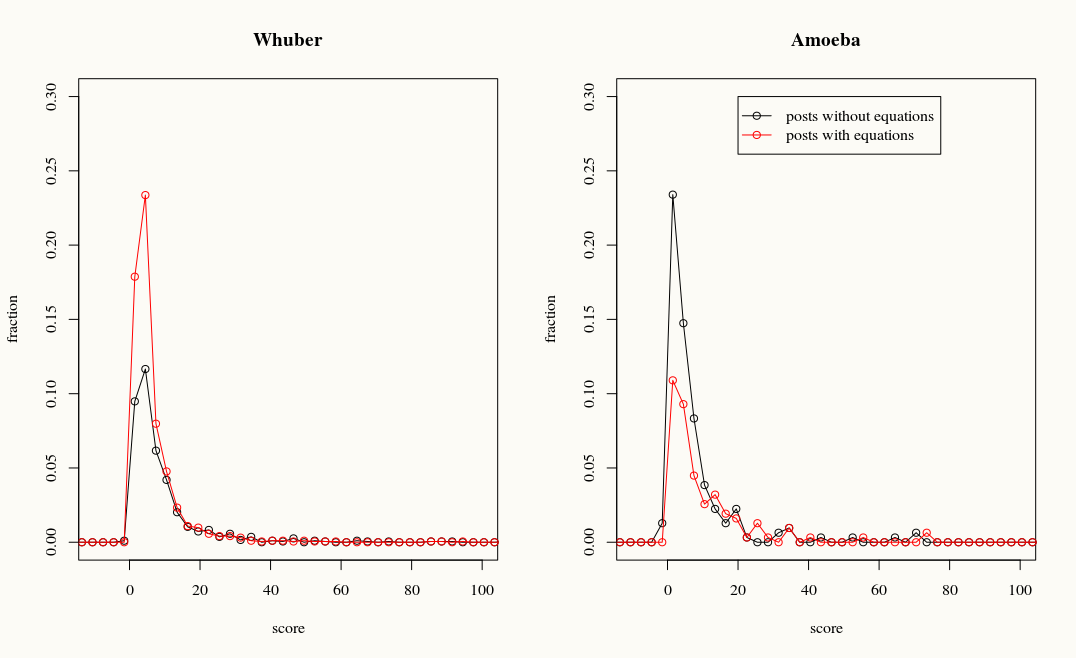 I think the difference between with/without after a score of 20 for Amoeba is interesting.

The above histogram/distribution for Whuber and Amoeba is now plotted for the nine members, and as a cumulative score on a log scale on the y-axis and an inverted square scale on the x-axis.

The differences between 'with' and 'without' equations seem to be in

While using these correlations still leaves us guessing for interpretations in terms of causal effects, I believe that it is very likely that the majority of the differences between answers with and without equations is due to the correlation with confounding variables and that it is more like the topic of the answer/question is influencing the scores, instead of the 'fact that there is an equation in the post'. I believe that the widely varying distributions and answering styles of different users supports this, and we may rightfully wonder about the common adagio that 'adding an equation to a book/presentation is going to reduce the attention'. 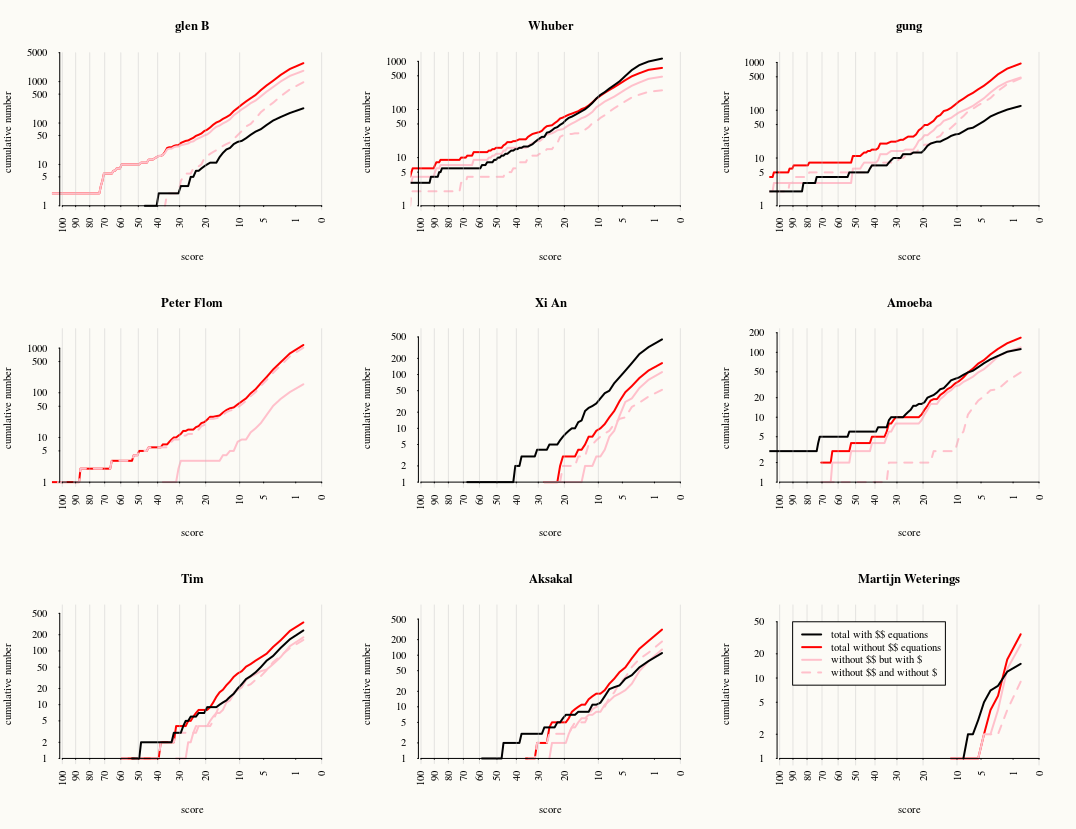 Not the answer you're looking for? Browse other questions tagged discussion answers votes reputation math-display .

41
Are we seeing a dramatic drop in answers per question?
10
How to choose between posting a picture and providing its link?

6
Strategies for answering questions that may be unclear
23
CrossValidated's rather extreme up-voting problem
15
Low profile low quality answers
6
Why do people downvote old questions and answers?
42
Rich get richer phenomenon on CV
2
Proposal to merge Cohen's kappa Q/A
14
How can I figure out why my reviewer privileges were revoked and how can I get them back?