A question with the same exact title was posted on tex stackexchange by Scott Morrison. I think the point made by Scott is very insightful and we should strive to follow the advice given. What do you think?

I'm a moderator from MathOverflow, and this "question" is actually unsolicited advice, based on our experience from the initial launch of MathOverflow.

We should encourage everyone to vote positively as often as possible!

Every Stack Exchange site will eventually end up with a different "base level" of voting --- that is, the expected number of upvotes for a question of a given level of excellence. (This effect occurs because people see a good question, but already with a certain number of votes, and think "oh, I would have upvoted this, but it already has enough".)

It's easy for us to affect this "base level" by encouraging high levels of upvoting now. We're setting the standards, and this really will have an effect.

(On MathOverflow, we were very active about this early on, specifically encouraging all the initial round of users to vote early and often. You can compare statistics, and see that the average vote total for a MathOverflow question is much higher than on any of the other SE 1.0 sites.)

In case it's not obvious: the rationale for wanting this base level to be high is that it provides better positive feedback to good contributors.

Since this is a stats website, I thought there really should be some graphs!

Below are two graphs. In each plot:

Figure 1: Ratio of Up votes against Reputation 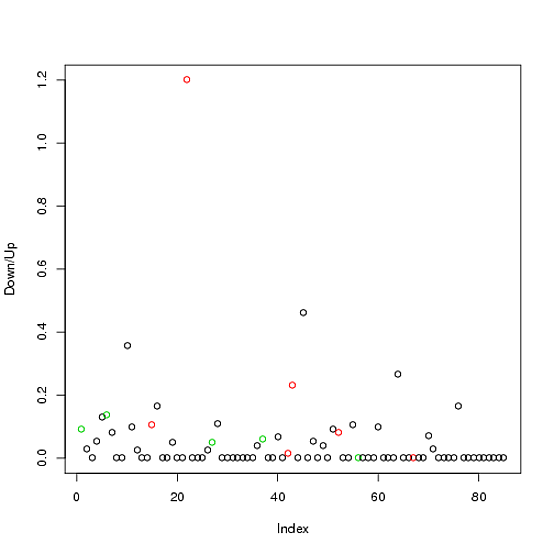 Another suggestion by Scott in the same thread:

A good rule of thumb: if you can be bother answering the question, it's good enough to upvote! Also, be kind, and upvote any good competing answers that exist when you give your answer.

I plan to follow the above advice and scan all the questions I answered in order to upvote clear questions and clear answers.

I agree that we should vote more often. However, we shouldn't up-vote on poorly worded questions. For example, this recent question is pretty vague, yet at one point it had two up votes.

I tend to downvote poorly worded questions, and then reverse that decision once (if?) the question is corrected.

Still, there is a problem of scope; one may give a brilliant answer to a question that is hardly interesting for a bulk of people and so lands with only an acceptation. On the other hand first useful (even not so well done) answer to a popular question will gather a lot of votes, especially when we would encourage voting on every answer that one thinks is nice.

6
Is it ever too early to upvote or downvote a question?
24
CrossValidated's rather extreme up-voting problem
8
Criterion for “Unanswered” question - should it change?
18
R StackExchange package

2
Site name voting: decision time
11
Probability questions: reaching stats.SE, math.SE, and MO audiences
7
At the 11 comments mark do I need to move my question to chat?
6
How should performance answering questions best be evaluated
11
Defining clearer house rules on software-related questions
6
Is it ever too early to upvote or downvote a question?
4
Defining “open-ended” for research-oriented StackExchange sites
1
Can a question classified as community wiki be rolled back to a standard question?
25
Should we reduce the vote threshold for closing questions?