What does the logo for CrossValidated represent?

I'm talking about this puppy:

It kinda looks like a heat-map or correlogram, but I would expect the other diagonal to be picked out in green, were that the case. (My expectations may be flawed. :)

I read the post by the logo's seeming designer, but that doesn't explain.

What kind of graph is it?

If that impression is accurate*, in each "row" of the image, the pale green block would represent the validation-set (test-set) for that fold.

The fact that it also sort of looks leaf-like I find rather attractive, personally.

* Oops, I see now that amoeba had already indicated this in comments, with a link. Nice to know my impression was correct.

As for what k-fold cross-validation is, a detailed explanation would really be a question for the main site. Besides the Wikipedia link above, Rob Hyndman gives some discussion on his blog; however, I suppose a very brief outline - sufficient to motivate the appearance of the logo - is not out of order.

In order to properly assess the out of sample behavior of some procedure (very important if you're interested in prediction, say, but also important in estimation because we want to generalize to the population, which is almost entirely outside our sample), we hold out some of our data from the data we use for estimation, in order to assess/validate (a.k.a. "test") the performance of the model on that part (by any criterion of interest; mean square error for example). In k-fold cross validation we do this by dividing the data into $k$ equal pieces and performing $k$ such steps of estimation-then-validation.

If we are trying to see how well we'd predict some additional data, or if we want to compare the performance of two possibly very different models, for example, this avoids issues of overfitting (because we see how well the model does on data we didn't use in the fitting); we don't need to account for the fact that some models may have many more parameters for example, since they don't get an advantage from that when looking outside the data used in the fitting. [There's much more to be said but this isn't the place for it, and there are certainly better people to explain it than me.]

So anyway if we divide our data into five equal-sized pieces (first putting the observations in random order) and hold one of those 5 pieces out, we would estimate on 80% of the data and test (validate) on the remaining 20%, but we'd do that five times, where each fifth would serve as the test set once. A diagram of the first two rounds of a 5-fold cross validation would look something like this: 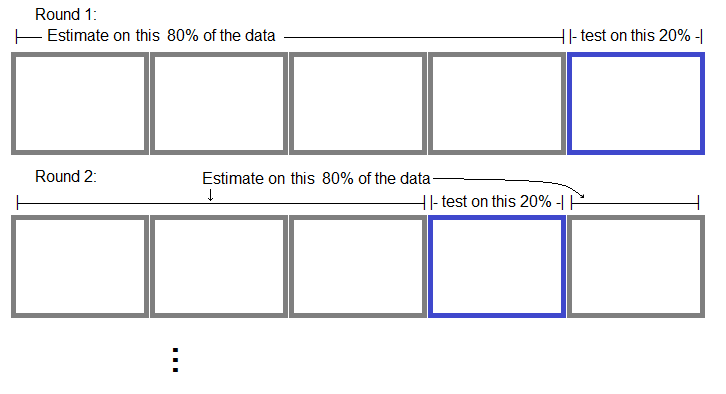 ... and so on for a further three rounds. (The name of our chat site -- "Ten Fold" -- also relates to cross-validation. Ten fold cross validation is common.)

Hopefully the relationship of the above diagram to the first two "rows" of the site logo is clear.

Diagrams like this are often found in discussions of cross-validation. See, for example, figure 5.5, p181 of James et al "Introduction to Statistical Learning" (pdf of the 6th printing is downloadable from the website of the first author, here), which also depicts five-fold cross validation. (Reading pages 175-184 gives a nice simple introduction to some of these ideas.)

Not the answer you're looking for? Browse other questions tagged discussion logo .

13
What should our logo and site design look like?

24
Could we change the color of the accepted answer check for color blind people?
12
Is it appropriate to ask whether an idea you have is good and original?
15
Should I opt for a comprehensive answer at the price of making it a long one?
3
What is the proper balance between question & title specificity?
11
What should the "best practices" tag be for?
16
To what extent should the deletion by the OP of answered questions be acceptable?
4
What to do if your accepted answer is wrong and you believe you know the right answer?
2
Should I ask questions about interpreting printouts from a statistical package here or on SO?