I recently offered my first bounty on this question:

One user answered, and while I thought his answer was helpful, it mostly confirmed what I already believed, so I wanted to wait and see if anyone else would offer a different perspective.

No additional answers, though, and I received a message to the effect that the bounty would be auto-awarded. 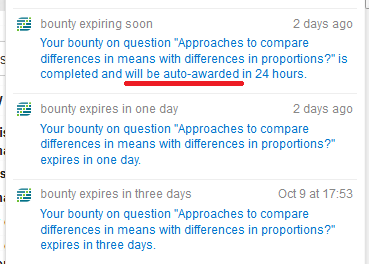 So I didn't worry about manually awarding it, because I thought it was taken care of.

However, it didn't get awarded. After doing some research, I believe that the answer did not qualify for auto-award due to not having 2 upvotes, but this requirement is not reflected in the message.

Moderators can't do anything about what happened to the bounty, sorry. In fact there are very few circumstances in which we can do anything at all with bounties.

I definitely agree that the "will be auto-awarded" message is somewhat misleading about what the situation is, because it either seems to suggest that there's nothing to do and it will definitely award the bounty; or possibly even that somehow it is already too late for you to award the bounty yourself. What it actually means is something nearer to "Award your bounty in the next 24 hours; after the 24 hour period the bounty auto-award script will run".

However we also can't really do anything about the message, which is system-wide (we can do the same thing you can do - post a question on meta.SE about it; that might get some traction).

The way it operates is discussed here:

How does the bounty system work?

(About half-way down the page see the answer to the question "What is automatic awarding?")

[That's part of the community FAQ which is here.]

There's a few meta posts that relate to bounty messages, some with what look like good suggestions, such as these ones (though possibly some of them may be a little outdated by subsequent changes, there are some good ideas to be found):

Not the answer you're looking for? Browse other questions tagged discussion feature-request status-review bounty notifications .

9
Unclaimed bounty points: where did they go?
5
Was Community meant to own this bounty?
6
Does the bounties page of user profile have a bug? (or am I just especially dense?)
3
How to filter for questions that had a bounty on them?
10
What's the rationale for the 24 hour wait period for bounties to reward existing answers?
5
Adding bounty to an already bountied question
58
Help spread the wealth
2
Why can't I offer a bounty to this question?