For some reason the rendering of the right hand column of the webpage is overlapping my comments and is preventing me from editing or deleting my post... 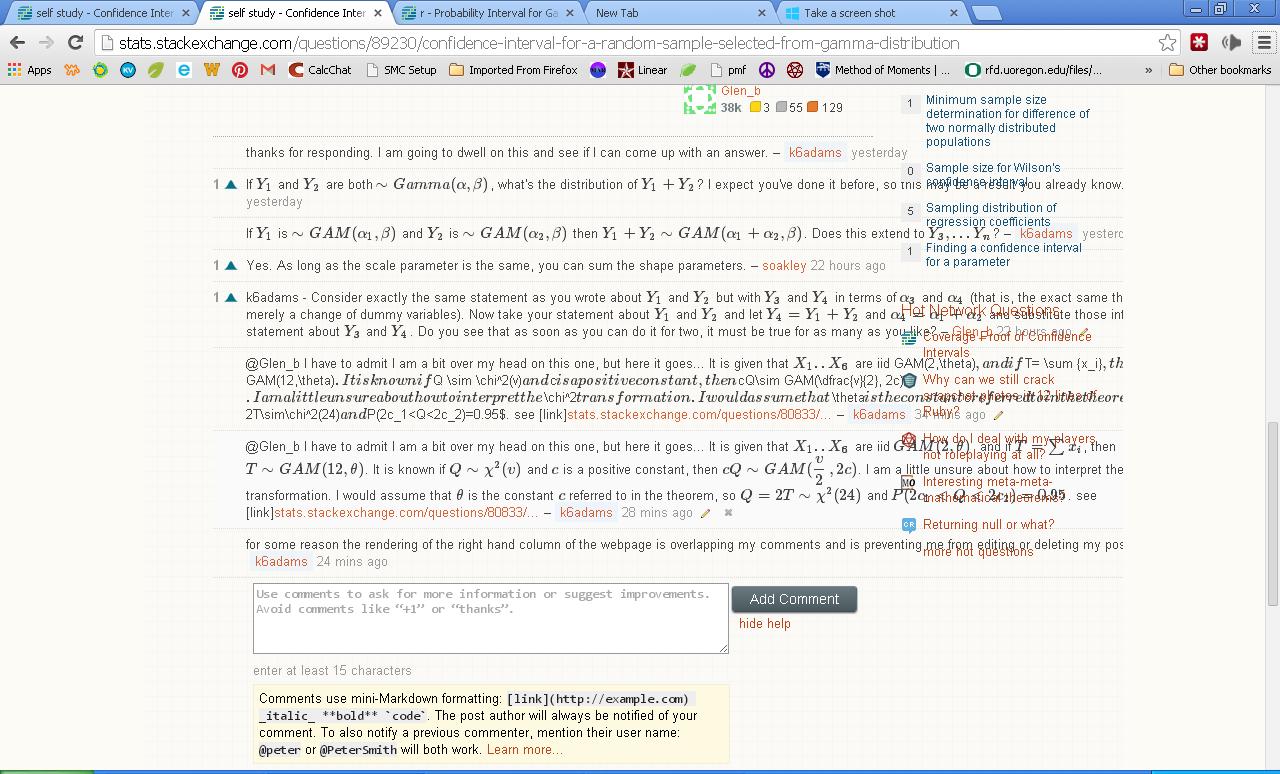 This rendering occurred because:

I have edited the comment to correct these errors. Please check that it looks alright. I (or one of the other mods) can make additional edits, if necessary.

It was actually a little difficult to even make the edits: I had to go into my browser's DOM inspector and manually hide the "Hot Questions" bar at the right so that I could click on the comment's edit link.

Please make sure to double-check the MathJax and other markdown before submitting comments. For complicated math in comments, one way to double-check is to use the page's Answer box to make sure it renders properly there and then cut and paste everything into a comment once it looks alright.

As cardinal notes in his answer, the problem is caused by an extremely long MathJax expression that exceeds the normal width of the comment area. Normally, MathJax does allow excessively long expressions to be broken over multiple lines, but that requires the expressions to actually contain some "natural" breakpoints such as commas or math operators. If it's all just run-on text, it won't get wrapped.

Since the comments are formatted using HTML tables, the over-long math expression then causes the whole comments table to expand to accommodate it. The obvious fix would be to set an explicit maximum width for the comment text, e.g. with:

These CSS rules cause any over-wide comments to acquire a horizontal scroll bar instead of spilling over into the sidebar, like this:

Ps. While waiting for the SE devs to fix this styling issue properly, I've added the CSS fix described above to version 1.22 of the Stack Overflow Unofficial Patch. (Earlier versions, since v1.10, included a slightly different fix using table-layout: fixed instead.) Please let me know if you encounter any unwanted side effects from it.

Not the answer you're looking for? Browse other questions tagged bug comment design math-display .

4
Site design Ideas (updated with mockups)
3
Math processing error
4
Are commenters notified when the original post is edited?
23
CrossValidated's rather extreme up-voting problem
35
How best to use the review queue?
10
Should the comments be used to guide someone to the answer?
6
MathJax has ceased rendering on my system
4
(Why) does CV post comments under my name and without notifying me?