Does the bounties page of user profile have a bug? (or am I just especially dense?)

This has been nagging at me a while.

I guessed I'd figure out what was going on eventually, but I haven't - I am more puzzled than ever. If it is a bug I could post it to meta.SO* -- but it's more likely to be something obvious I missed.

*(I searched there but didn't turn anything relevant up)

On the bounties offered page of people's user profile, there's a list of bounties offered (no surprise there). Below is part of mine. On the right had side are user names beside each one (see the red oval below -- you may be able to open the image in its own browser tab or 'view it' in this tab to see a larger version; or see my bounties offered page, but it will eventually come to differ from the picture): 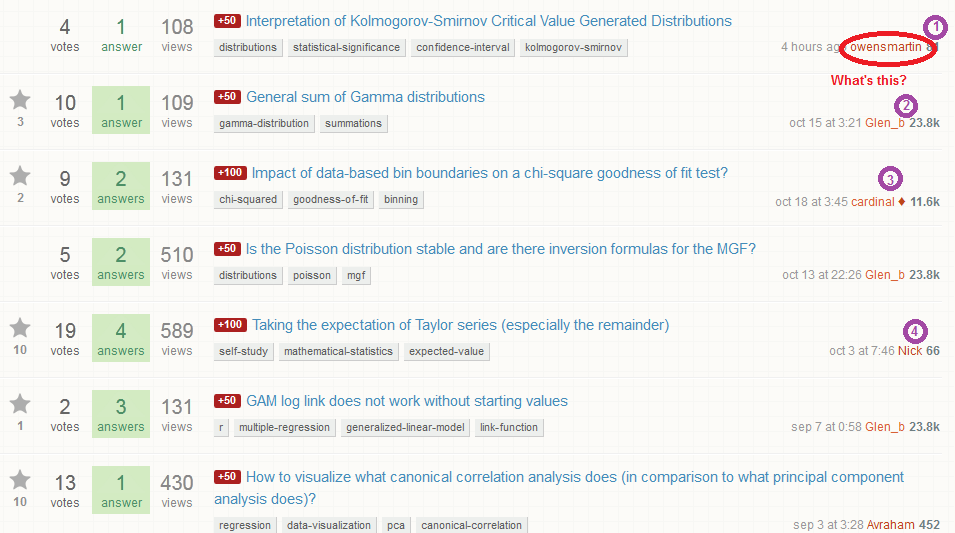 I keep trying to figure out what it actually represents. Looking at ${\color{purple}{(1)}}$ and ${\color{purple}{(3)}}$ (those purple numbers in the text are also links to the corresponding posts, by the way) you'd think it was the person to whom the bounty was awarded. Makes perfect sense.

So it isn't that. What did I do on that page? I edited the question, and I commented under whuber's answer (and some time later deleted it); aside from awarding a bounty, that comment and later deletion would have been the last things I did there, likely around that indicated time. Why would anyone care to associate that bounty award with someone that just deleted a comment? Is it treating me as special because I also awarded the bounty? ... well, no:

(I suppose I'll turn my comment into an official answer, so that this doesn't get recorded as unanswered.)

I think the answer is #1. The name listed is simply the last person to record a change (i.e., added a new answer or edited an existing post). This is consistent with the way a lot of other pages work in the SE system. I suspect that there is some code that makes various pages work this way and this behavior is simply inherited rather than having been coded up separately (and deliberately) to behave that way.

Not the answer you're looking for? Browse other questions tagged discussion bug .

24
Could we change the color of the accepted answer check for color blind people?
3
Is this a bug or is there a large lag between the time the grace period ends and the time a bounty is automatically awarded?
7
Is there a problem with a (previously unawarded) tag badge?
6
Changes to tag Wiki gone missing
11
Improve messaging on upcoming bounty expiration
58
Help spread the wealth
1
Why can members with low reputation post bounties worth more than their total reputation?
8
A ghost wiki excerpt after tag merge
16
What (if anything) should we do about user profiles for users who have passed away?