Comments on comments and communicating with a commenter

If not, is there any way I can draw their attention to it? I assumed the site would have a personal message feature, but if it does, I have not been able to find it.

It depends -- if you use the @-reply feature and the other person is already in the thread, then yes they will receive a notification.

Let's look at an example: 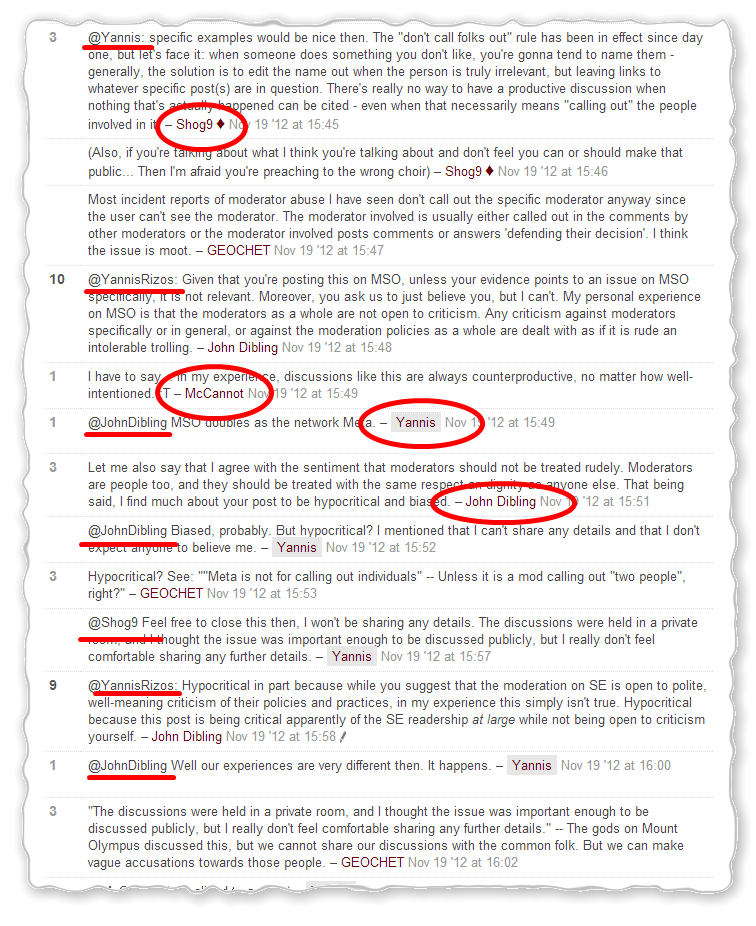 In this picture, I've underlined the @-replies and circled various people who received replies in the course of the conversation. The user named Yannis is highlighted in gray because he was the owner of the post that these comments are attached to.

Through the course of the conversation, Yannis received the replies to @YannisRizos, both because he was "pinged" as well as because he owned the post. The user John Dibling received notice about any posts that included @JohnDibling in the body at all, just as Shog9 received messages directed towards @Shog9.

Later on in the conversation, someone else (not Yannis) responds to McCannot as well.

I hope this helps!

Not the answer you're looking for? Browse other questions tagged support comment .

5
I cannot add comments on cross validated!
12
Obsolete comments: To flag, or not to flag?
5
Downvoting comments
14
Are plain "Welcome to our site" comments too chatty?
3
Handling users who act inappropriately after warnings and after being directed to posting guidelines
9
Can I move a conversation to chat before the 11 comments threshold?
5
How should I flag (or otherwise deal with) questions that have not been clarified after comments were left?